On the Western Front 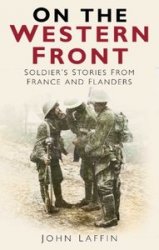 Author: John Laffin
On the Western Front
The Uistory Press
1997
ISBN: 1840150025
Format: EPUB
Size: 23,5 МБ
Language: English
Pages: 287
Official histories of the First World War are accounts of strategy and tactics, political and logistical considerations. After reading them many might ask why soldiers are rarely mentioned except in terms of military units. Even regimental histories devote more space to the plans and concepts than to the men used to implement the plans. This book was the first serious attempt to illustrate the humanity of the soldier on the Western Front, reflecting the war as they saw it from first shot to last. These tales, told to fellow men in the trenches, behind the lines, at base hospitals and at the estaminets and billets during rest periods, have been recorded here.