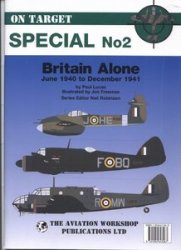 Author: Paul Lucas
Britain Alone June 1940 to December 1941 (On Target Special No2)
Aviation Workshop
2003
ISBN: 190464306X
Format: PDF
Size: 25,7 МБ
Language: English
Pages: 72
Between the fall of France in June 1940 and Hitler's invasion of the Soviet Union in June 1941, the British Isles stood completely alone without a major European ally in the struggle against Nazi Germany. Even when the Soviet Union was brought in to the war in far off eastern Europe, it was by no means certain that an alliance between Britain and the Soviet Union would last for more that a few months before the Soviets would be overrun and defeated, such was the initial success of 'Operation Barbarossa'. It was only with the entry of the United States in to World War Two, following the Japanese attack on Pearl Harbor in December 1941, that the ultimate path to victory over Nazi Germany became clearer.
The eighteen months between June 1940 and December 1941 saw many anomalies and significant changes to the camouflage and markings of British military aircraft which were operating in many different parts of the world and makes for a fascinating period to study. To record every facet of these camouflage and markings during this time however would be a task which would require a book many times the size of this volume. Instead, this On Target Special seek to examine some of the lesser known and more unusual aspects of British camouflage and markings practices through a series of essays chronologically grouped around the period, in three specific Theatres of Operations, namely the Air Defence of the United Kingdom, the Battle of the Atlantic and the war in the Mediterranean and Middle East.