Christopher Columbus and the Age of Exploration for Kids: With 21 Activities (For Kids series) 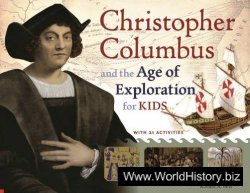 Christopher Columbus is one of the most famous people in world history, yet few know the full story of the amazing, resourceful, and tragic Italian explorer. Christopher Columbus and the Age of Exploration for Kids portrays the “Admiral of the Ocean Seas” neither as hero nor heel but as a flawed and complex man whose significance is undeniably monumental. Kids will gain a fuller picture of the seafarer’s life, his impact, and the dangers and thrills of exploration as they learn about all four of Columbus’s voyages to the New World, not just his first, as well as the year that Columbus spent stranded on the island of Jamaica without hope of rescue. Students, parents, and teachers will appreciate the in-depth discussions of the indigenous peoples of the New World and of the consequences of Columbus’s voyages—the exchange of diseases, ideas, crops, and populations between the New World and the Old. Fun hands-on activities illuminate both the nautical concepts introduced and the times in which Columbus lived. Kids can:
- Tie nautical knots
- Conduct a blanket (silent) trade
- Make a compass
- Simulate a hurricane
- Take nautical measurements
And much more