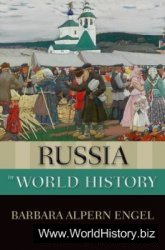 This volume offers a lively introduction to Russia's dramatic history and the striking changes that characterize its story. Distinguished authors Barbara Alpern Engel and Janet Martin show how Russia's peoples met the constant challenges posed by geography, climate, availability of natural resources, and devastating foreign invasions, and rose to become the world's second largest land empire. The book describes the circumstances that led to the world's first communist society in 1917, and traces the global consequences of Russia's long confrontation with the United States, which took place virtually everywhere and for decades provided a model for societies seeking development independent of capitalism. This book also brings the story of Russia's arduous and costly climb to great power to a personal level through the stories of individual women and men-leading figures who played pivotal roles as well as less prominent individuals from a range of social backgrounds whose voices illuminate the human consequences of sweeping historical change. As was and is true of Russia itself, this story encompasses a wide variety of ethnicities, peoples who became part of the Russian empire and suffered or benefited from its leaders' efforts to meld a multiethnic polity into a coherent political entity. The book examines how Russia served as a conduit for people, ideas, and commodities flowing between east and west, north and south, and absorbed and adapted influences from both Europe and Asia and how it came to play an increasingly important role on a regional and, ultimately, global scale.