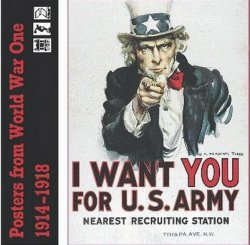 Posters from World War One 1914 - 1918. Deutsches Historisches Museum, Berlin
The historian of the future, wrote the journal Das Plakat in the final year of World War One, should give the poster archives more than just a cursory glance, as the World War poster revealed a great deal about the psyche of the masses. For all the nations involved in World War One, the "war of pictures" promoted an expectation of victory, a readiness to make sacrifices and the will to stay the course. The fame of the poster designers, the numerous poster competitions and the numbers of posters printed demonstrate the importance attributed to picture propaganda. Hans Sachs, the editor of the journal, recommended the posters as a worthy subject for collection, providing as they did insight into artistic achievements in the field of propaganda and into the self-image of the respective warring parties.
His recommendation was justified. In the four years of the war the poster artists of Europe and America presided over the coming of age of the political poster of the 20th century. The crisis within the community of European nations called forth a pictorial world which would continue to shape the image of one nation in the eyes of its neighbour until the middle of the century, with the most striking examples enduring even to the present day. This is particularly true of French and English posters which employed extreme images of the enemy to terrify the population or outstanding creative designs to canvass support for mobilization. America's entry into the war in 1917 raised the quality of poster propaganda still further.