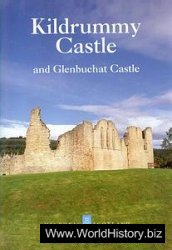 Glenbuchat Castle is a Z-plan castle built for John Gordon of Cairnburrow in 1590. In 1701 it was bought by a different branch of the Gordon family and became the home of another John Gordon who came to be known as 'Old Glenbucket' (an older spelling of Glenbuchat). He was a prominent supporter of the Jacobite cause and a hero of the Jacobite Risings of 1715 and 1745. Such was his infamy that he is said to have haunted the dreams of King George II. By 1738 the castle had been abandoned as the Gordon family home and was already partly unroofed when it was sold to the Duff Earl of Fife.