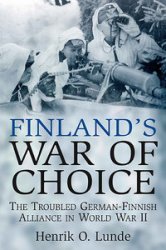 Author: Henrik Lunde
Finland's War of Choice The Troubled German-Finnish Alliance in World War II
Casemate
ISBN: 1935149482
2011
Format: MOBI
Size: 5,4 МБ
Language: English
Pages: 432
This book describes the odd coalition between Germany and Finland in World War II, and their joint military operations from 1941 to 1945. This is a topic often missing in English, though in stark contrast to the numerous books on the shorter and less bloody Winter War. That conflict represented a gallant fight of a democratic "David" against a totalitarian "Goliath" that caught the imagination of the world. The story of Finland fighting alongside a "Goliath" of its own has not brought pride to that nation and was a period many Finns would rather forget.
The prologue of this book brings the reader up to speed by briefly examining the difficult history of Finland, from its separation from the Soviet Union in 1917 to its isolation after being bludgeoned in 1939-40. It then examines both Finnish and German motives for forming a coalition against the USSR, and how-as logical as a common enemy would seem-the lack of true planning and preparation would doom the alliance.