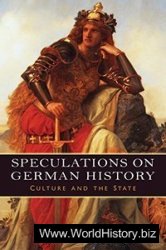 Author: Barry Emslie
Speculations on German History (Studies in German Literature Linguistics and Culture)
Camden House
2015
ISBN: 157113929X
Format: PDF
Size: 3,4 МБ
Language: English
Pages: 256
German history never loses its fascination. It is exceptionally varied, contradictory, and raises difficult problems for the historian. In a material sense, there have been a great many Germanies, so that it was long unclear what""Germany"" would amount to geopolitically, while German intellectuals fought constantly over the idea(s) of Germany. Provocative and spiced with humor, Speculations tackles Germany's successes and catastrophes in view of this fraught relationship between material reality and ideology. Concentrating on the period from Friedrich the Great until today, the book is less a conventional history than an extended essay. It moves freely within the chosenperiod, and because of its cultural studies disposition, devotes a great deal of attention to German writers, artists, and intellectuals. It looks at the ways in which German historians have attempted to come to terms with theirown varying notions of nation, culture, and race. An underlying philosophical assumption is that history is not one dominant narrative but a struggle between competing, simultaneous narratives: like all those Germanies of thepast and of the mind, history is plural. Barry Emslie pursues this agenda into the present, arguing that there has been an unprecedented qualitative change in the Federal Republic in the quarter-century since unification.Barry Emslie lives and teaches in Berlin. He is the author of Richard Wagner and the Centrality of Love (Boydell Press, 2010) and Narrative and Truth: An Ethical and Dynamic Paradigm for the Humanities.