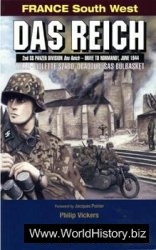 The infamous SS Das Reich Division was resting in Montauban, South West France when the Allies invaded Normandy in June 1944. When ordered to rush North, they ran into a series of French Resistance, SAS and SOE delaying actions. This ruthless Division reacted violently and their reprisals culminated in the Massacre at Oradour. This book tells the story of those heroic and tragic days from the British, French and German viewpoints.