Defeat to Victory - No.453 Squadron RAAF 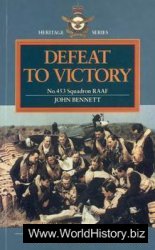 This is a comprehensive and detailed record of the Squadron’s operations in both Malaya and Europe and surely will evoke telling memories and feelings for all who read it, particularly for those who served in the Squadron. The operational successes described in the book are events of which Squadron members can be proud. On the other hand the reminder of the loss of so many fine comrades is a stark feature of the grimmest aspect of war and something those of us remaining continue to grieve over. 453 Squadron had a somewhat unique existence in that it was first formed in Australia in July 1941 and after a short but courageous period in Malaya it was withdrawn to Australia and disbanded in March 1942. Three months later, however, the Squadron was reformed in the United Kingdom where it again performed with distinction. Soon after the cessation of hostilities it was again disbanded, once and for all.