Air Power in the Age of Total War 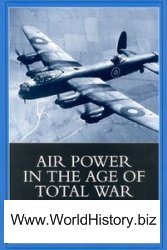 Author: John Buckley
Air Power in the Age of Total War
Indiana University Press
ISBN: 025321324X
1998
Format: PDF
Size: 3,7 МБ
Language: English
Pages: 269
Warfare in the first half of the 20th century was fundamentally and irrovocably altered by the birth and subsequent development of air power. This work assesses the role of air power in changing the face of battle on land and sea. Utilizing late-1990s research, the author demonstrates that the phenomenon of air power was both a cause and a crucial accelerating factor contributing to the theory and practice of total war. For instance, the expansion of warfare to the homefront was a direct result of bombing and indirectly due to the extent of national economic mobilization required to support first rate air power status. In addition, the move away from the principle of total war with the onset of the Cold War and the replacement of air power by ICBMs is thoroughly examined. This work should provide students of international history, war studies, defence and strategic studies with an insight into 20th-century warfare.