A History of the English-Speaking Peoples, Vol.1-4 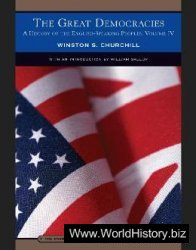 During the 1930's Winston Churchill was enduring his "wilderness years" and was quite prolific in his journalistic efforts. Mr. Churchill began this rather ambitious effort of the history of the English Speaking Peoples in 1937.
This four volume effort wasn't published until the years of 1956-1958. You see Winston had to serve England as Prime Minister from 1939 to 1945. After that he had to write his Nobel Prize winning 6 volume compilation of World War II. During this time Sir Winston was the leader of the Conservative opposition party from 1945 to 1951. After that he again served as Prime Minister until 1955.
Mr. Churchill didn't finish this history of the English Speaking Peoples until he was in his early 80's. One thing about Mr. Churchill, he didn't let any grass grow under his feet.
As a great writer and historian, Mr. Churchill has always had a bias of the English language, laws and its history. Being the master of the English written word, it seems quite right that it was he to write this historical sketch of the English people. Winston goes into great depth of the birth of England and its subsequent development including all the detailed trials and tribulations. He details the narrative of the monarchy into the development of a Democratic form of government.
The rather long history is divided into four books as follows:
1.) The Birth of Britain
2.) The New World
3.) The Age of Revolution
4.) The Great Democracies
Churchill expounds of the development and governance of the British Empire. He also details much of American history, especially the minutiae of the Civil War.