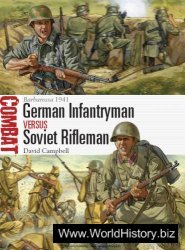 The Axis invasion of the Soviet Union on 22 June 1941 pitted Nazi Germany and her allies against Stalin’s forces in a mighty struggle for survival. Fighting alongside the spearhead Panzer divisions were Germany’s highly skilled and veteran motorized infantrymen – including the German Army’s premier unit, Infanterie-Regiment (mot.) Gro?deutschland. Opposing these German mobile forces, the Soviets deployed the often ill-trained and poorly equipped men of the rifle regiments, who fought tenaciously and with the threat of savage reprisals from their own side. In this book three bruising clashes during the first seven weeks of the campaign are assessed – a bloody encounter battle at Zhlobin, the struggle for the destroyed city of Smolensk and then a prolonged clash along a dangerously stretched German defensive perimeter at Vas’kovo–Voroshilovo.