Heroes or Traitors - The German Replacement Army, the July Plot, and Adolf Hitler 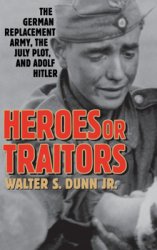 A riveting account of the conspirators who plotted to kill Hitler in July 1944, and the methods they used to keep a half million men from the battlefields of France and Russia. Without the efforts of these high-ranking German officers, the war against Hitler might have had a completely different outcome. It is a highly detailed account, but also a very readable book.