The Centurion Tank (Images of War) 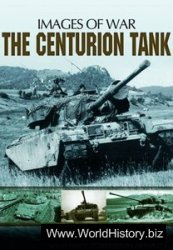 Few tank designs have been as effective, versatile and long-lived as that of the British Centurion. Conceived during the Second World War as the answer to the superior German Tiger and Panther tanks and to the lethal 88mm gun, this 52-ton main battle tank incorporated the lessons British designers had learned about armored fighting vehicles during the conflict, and it was free of the major faults that had impaired the other British tank designs of the time. The Centurion was so successful that it served in the British Army and in numerous other armies across the world from 1945 until the 1990s.Pat Ware's highly illustrated history of this remarkable tank covers its design and development, its technical specifications and the many variants that were produced. He tells the story from the design brief of 1943, through testing and trials to the tank's entry into service. In addition, he traces the course of the Centurion's subsequent career, as it was up-dated, up-gunned and adapted to operate in varied conditions and conflicts all over the world including Korea, the Indo-Pakistan wars, Vietnam and the Arab-Israeli wars. His expert account of this remarkable fighting vehicle is accompanied by a series of color plates showing the main variants of the design and the common ancillary equipment and unit markings. His book is an essential work of reference for enthusiasts.