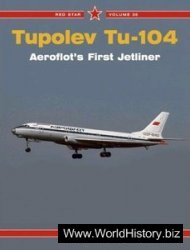 Author: Y. Gordon
Red Star Series 35 - Tupolev Tu-104 Aeroflot's First Jetliner
Midland
2007
ISBN: 1857802658
Format: PDF
Size: 29,2 МБ
Language: English
Pages: 129
The Tupolev Tu-104 Camel was a twin-engined, medium-range, turbojet-powered airliner. Following the British-built Comet and Canadian Avro Jetliner, the Tu-104 became the world s third jet airliner to take to the skies when it made its maiden flight in June 1956. Produced by the Tupolev design bureau, the Tu-104 was a civilian version of their jet bomber, the Tu-16 Badger . The first aircraft could carry 50 passengers, but subsequent variants saw this capacity increased to 100. Some 200 aircraft were manufactured by the time production ceased in 1960. It was also flown by the Czech airline, CSA. Aeroflot s final examples were withdrawn in the early 1980s, although a number were still used by the Soviet military authorities for training cosmonauts.
This volume examines the development and operational record of the Tu-104 from the early 1950s to the end of its career with the Soviet forces. The book focuses on the type s civilian career and examines all variants of the
Tu-104 produced, including the prototype Tu-110 four-engined transport aircraft derived from the type.