Massacre: The Life and Death of the Paris Commune of 1871 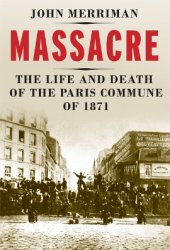 One of the most dramatic chapters in the history of nineteenth-century Europe, the Commune of 1871 was an eclectic revolutionary government that held power in Paris across eight weeks between 18 March and 28 May. Its brief rule ended in ‘Bloody Week’ – the brutal massacre of as many as 15,000 Parisians, and perhaps even more, who perished at the hands of the provisional government’s forces. By then, the city’s boulevards had been torched and its monuments toppled. More than 40,000 Parisians were investigated, imprisoned or forced into exile – a purging of Parisian society by a conservative national government whose supporters were considerably more horrified by a pile of rubble than the many deaths of the resisters.
In this gripping narrative, John Merriman explores the radical and revolutionary roots of the Commune, painting vivid portraits of the Communards – the ordinary workers, famous artists and extraordinary fire-starting women – and their daily lives behind the barricades, and examining the ramifications of the Commune on the role of the state and sovereignty in France and modern Europe. Enthralling, evocative and deeply moving, this narrative account offers a full picture of a defining moment in the evolution of state terror and popular resistance.