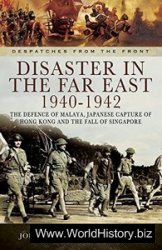 Author: John Grehan
Disaster in the Far East 1940-1942 (Despatches from the Front)
Pen and Sword
2015
Format: EPUB
Size: 1,5 МБ
Language: English
Pages: 224
Despatches in this volume include that on the Far East between October 1940 and December 1941, by Air Chief Marshal Sir Robert Brooke-Popham; the despatch on operations in Hong Kong between 8 and 25 December 1941, by Major-General C.M. Maltby, General Officer Commanding British Troops in China; the report on the air operations during the campaigns in Malaya and Netherland East Indies between December 1941 and March 1942; and the important despatch by Percival detailing the fall of Malaya and Fortress Singapore. This unique collection of original documents will prove to be an invaluable resource for historians, students and all those interested in what was one of the most significant periods in British military history.