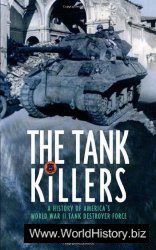 This is the story of the specialized U.S. armored force designed specifically to kill enemy tanks in direct combat. It follows the men who fought in the TDs from the formation of the force in 1941 through the victory over the Third Reich in 1945, through North Africa, Italy, France, and Germany, describing a story of American flexibility and pragmatism in military affairs. It draws heavily on the records of the tank destroyer battalions and the units with which they fought, and veterans of the force add their personal stories.