Warzaw 1 - Tanks in the Uprising 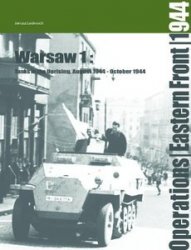 Author: Janusz Ledwoch
Warzaw 1 - Tanks in the Uprising
Leandoer & Ekholm Publishers
2012
ISBN: 9197589535
Format: EPUB
Size: 19,0 МБ
Language: English
Pages: 606
Many books have been written about the Uprising in Warsaw, but none have been written in this detailed manner describing the use of the armored weapons of war. Tanks in city environments had, earlier during World War II only been used very rarely, since it is very difficult to use them properly in built-up areas. The Uprising in Warsaw was unique, as both sides used tanks in the battle. This book gives a concise picture of the vehicles and the weapon systems that were used. The appendix of the book gives lots of interesting facts such as a list of the units in the Polish Home Army and the German