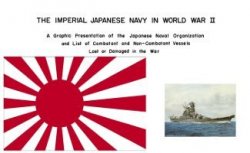 Author:
Imperial Japanese Navy in World War II - A Graphic Presentation of the Japanese Naval Organization
US Military
1952
Format: PDF
Size: 22,1 МБ
Language: English
Pages: 306
Graphic Presentation (charts and tables) of the Japanese Naval Organization.
Through instructions from the Supreme Commander for the Allied Powers to the Japanese Government, 12 October 1945, subject: Institution for War Records Investigation, steps were initiated to exploit military historical records and official reports of the Japanese War Ministry and Japanese General Staff. Upon dissolution of the War Ministry and the Japanese General Staff, and the transfer of their former functions to the Demobilization Bureau, research and compilation continued and developed into a series of historical monographs.
The paucity of original orders, plans and unit journals, which are normally essential in the preparation of this type of record, but were largely lost or destroyed during field operations or bombing raids, rendered the task of compilation most difficult; particularly distressing has been the complete lack of official strength reports, normal in AG or G3 records. However, while many of the important orders, plans, and estimates have been reconstructed from memory and therefore are not textually identical with the originals, they are believed to be generally accurate and reliable.