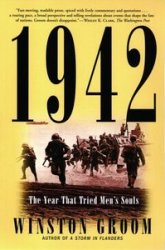 Author: Winston Groom
1942: The Year That Tried Men's Souls
Grove Press
ISBN: 0871138891
2004
Format: EPUB
Size: 5,7 МБ
Language: English
Pages: 480
From the author of Forrest Gump and A Storm in Flanders comes a riveting chronicle of America's most critical hour. On December 6, 1941, an unexpected attack on American territory pulled an unprepared country into a terrifying new brand of warfare. Novelist and popular historian Winston Groom vividly re-creates the story of America's first year in World War II.
To the generation of Americans who lived through it, the Second World War was the defining event of the twentieth century, and the defining events of that war were played out in the year 1942.