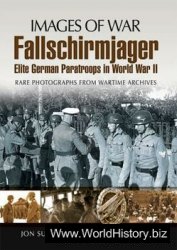 The photos in this book are taken from an unpublished album that belonged to a member of the elite German Paratroopers. First Sgt Wilhelm Plieschen served with Fallschirmjager Machine Gun Battalion 7, which suffered very heavy losses in the invasion of Crete, then saw bloody conflict as Hitler's "Fire-fighters" on the Russian Front and later put up fierce resistance in places such as Monte Casino. The revealing images that Jon Sutherland has compiled for us depict these struggles in dramatic detail, ranging from photographs taken en route to Crete of the paratroopers in a JU52 to 20 May 1941, when Plieschen was dropped over Crete. Some show other paratroopers drifting down and others feature formations of German aircraft amidst flak.