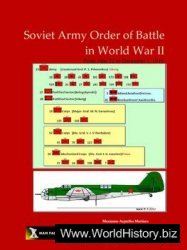 This work is to translate the structure and deployment of the Soviet Army on June 22 1941, at the historical moment of the beginning of Operation Barbarossa, and its evolution during the remainder of 1941. Given the endless controversy on this subject in the absence of matching two sources, the main source for this work are the papers published by the Department of Military History of the USSR MD. (Ministry of Defense of the Soviet Union), in which are reflected the data from June 22 to December 1, 1941.