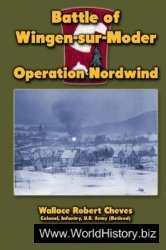 This is the story of the battle of Wingen-sur-Moder, an important village leading to the Alsatian Plain. If German forces had captured this town in the early days of Operation Nordwind, and had been able to release their reserve Panzer divisions into the plain, the war might have been lengthened. Colonel Cheves commanded the US forces involved in the battle. 2nd Bn of the 274th, along with troops from the 276th and supporting elements, defeated two battalions of the battle-hardened 6th SS Mountain Division (Nord).