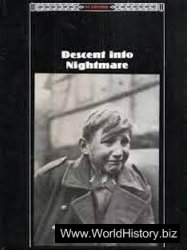 A frightened fifteen-year-old member of a Luftwaffe antiaircraft crew bursts into tears after being taken prisoner by the Americans near Giessen in west-central Germany in the spring of 1945. Bled dry of able-bodied men, Adolf Hitler turned in desperation to Germany's children, using them at first in civil defense roles but eventually plunging tens of thousands of teenage boys into combat. The youngsters were armed only with obsolete weapons, rudimentary training, and heavy doses of Nazi propaganda.