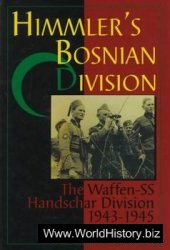 This is the story of the Handschar, a Muslim combat formation created by the Germans to restore order in Bosnia. What actually transpired was quite different.
A well written and detailed book about one of the Waffen SS units that is considered to be one of Hitler's, and Himmler's since he came up with the idea, inept units. The author builds the case that when the unit was fighting in it's homeland for their family, friends and neighbors defense the unit did a credible job. When they were tasked with fighting against the Soviets or outside of their homeland they failed.