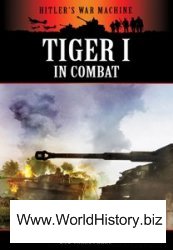 Author: Bob Carruthers
Tiger I in Combat (Hitler's War Machine)
Pen and Sword
ISBN: 1781591296
2013
Format: EPUB
Size: 2,4 МБ
Language: English
Pages: 128
"The Pz. Kpfw. VI with its heavy armor, dual purpose armament and fighting ability is basically an excellent tank." Major W. de l. Messenger, British Intelligence, 1944The Tiger I is the most famous tank in history. In the right hands, it enjoyed spectacular successes, but the Tiger I was also plagued by an array of technical and design flaws, which made it a death trap for novice and unwary crews. This unique overview draws on a wide variety of primary accounts of the Tiger I in action from both the Allied and the German perspective. Rare photographs, technical drawings and contemporary reports of the Tiger in combat help to set aside the myths and bring the reality into focus.This book is part of 'The Hitler's War Machine' series, a new military history range compiled and edited by Emmy Award winning author and historian Bob Carruthers. The series draws on primary sources and contemporary documents to provide a new insight into the true nature of Hitler's Wehrmacht. The series consultant is David Mcwhinnie creator of the award winning PBS series 'Battlefield'.