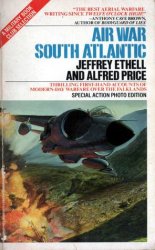 Historically, Britain used some South Atlantic islands for naval bases. The populace wished to stay with Britain. In 1982, the Falklands went from diplomatic issue to military crisis. Lying closer to Argentina, the initiative was theirs; April 2nd, they overwhelmed small British units. Margaret Thatcher's government sent naval and air units on Apr 5. The photos herein, and the blow-by-blow record, put you in the cockpits or with the troops as they fought. This was a war of Sea Harriers, Exocet and laser guided bombs, to stand off from heavily defended targets.