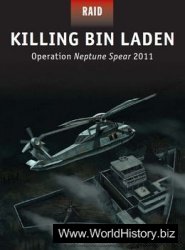 On May 2, 2011 a ten-year manhunt drew to a deadly end as the men of the US Naval Special Warfare Development Group (a.k.a. SEAL Team Six) closed in on their prey, Osama Bin Laden, the mastermind of the World Trade Center attack on September 11, 2001. Flown from Afghanistan by Army Special Operations Command’s 160th Special Operations Aviation Regiment (Airborne) and evading detection by the Pakistani military, two US helicopters flew towards the compound where they believed Bin Laden to be. Forty minutes later one helicopter had crashed and five people were dead, including the al-Qaeda leader. In this book the story of the raid is told, from start to finish, using specially commissioned full-colour artwork, photographs, and maps.