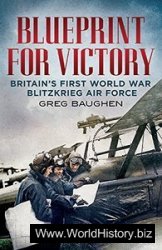 Author: Greg Baughen
Blueprint for Victory: Britain's First World War Blitzkrieg Air Force
Fonthill Media
ISBN: 1781553920
2014
Format: EPUB
Size: 1,6 МБ
Language: English
Pages: 192
In this radical reappraisal, Greg Baughen has used archive material to build up an intriguingly different picture of how air power developed in Britain before and during the First World War. Gone are the archetypal conservative army commanders stubbornly refusing to accept the new aerial weapon. Instead, Baughen reveals how even before the outbreak of war, the British Army had appreciated the potential of the airplane and describes in detail how during the war, air support evolved to a level of efficiency that would not be attained again by the RAF until the closing stages of the Second World War. The speed with which military aviation developed led to designs for warplanes that would leave a fateful and lasting legacy. The author also explains how social and political factors distorted air strategy, leading to a rival strategic bombing policy. Baughen reveals the fundamental flaws that emerged and questions the thinking behind the creation of an independent RAF. Blueprint for Victory: Britain’s First World War Blitzkrieg Air Force details the fierce battles as the rival factions fought for control. Many crucial lessons were learned. Little more than twenty years later, they would be applied with ruthless efficiency by the Luftwaffe.