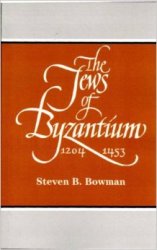 Author: Steven B. Bowman
The Jews of Byzantium 1204-1453
Bloch Pub Co
ISBN: 0819707031
1985
Format: PDF
Size: 5,7 МБ
Language: English
Pages: 379
Bowman presents the sources with a critical historical introduction for the rediscovery of Balkan and Aegean Jewry from the Fourth Crusade to the Ottoman conquest of Constantinople. The book traces the fortunes of Greek Jews, their contact with co-religionists from Spain, Italy, the Crimea and their interaction with the variegated local populations and endemic conquerors of the region. From the beginning of the 13th century to the 16th century with special chapters on intellectual life, rabbinic interests, mysticism, Greek culture and the social and economic dimension.