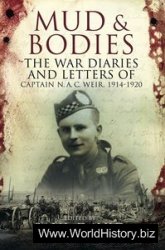 Author: Mike Burns, Saul David
Mud and Bodies The War Diaries & Letters of Captain N A C Weir, 1914-1920
Frontline Books
ISBN: 1848326882
2013
Format: EPUB
Size: 15,7 МБ
Language: English
Pages: 176
Neil Weir died in 1967, but it was not until 2009 that his grandson, Mike Burns, discovered his diary among some boxes he had been left, and learnt that his grandfather had served as an officer in the 10th Battalion Argyll and Sutherland Highlander throughout the First World War, seeing action at Loos, the Somme and Vimy Ridge, as well as in staff and training posts. It ends with his work at the War Office during the Russian Civil War of 1919-20.
In the diary, and the accompanying letters which have been collected from various members of the Weir family, we hear the authentic voice of a First World War soldier and get an insight into his experiences on the Western Front and elsewhere.
Edited and with introductory text by Saul David, this book is one of the most fascinating accounts ever published of the First World War as experienced by the men who fought it.