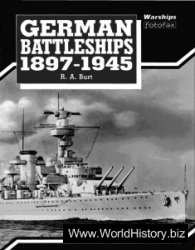 Author: R. A. Burt
German Battleships 1897-1945
Arms and Armour Press
ISBN: 0853689857
1989
Format: PDF
Size: 11,5 МБ
Language: English
Pages: 50
The concept of the modern German Navy dates only from the time of Kaiser Wilheim II and so it can be classed as a relatively new maritime power. Until about 1880, the only function of the German fleet had been to deter enemy raids on the German coastline, consequently only small coastal defence vessels were built. A newly formed German Naval Command (1889) was well aware that if expansion of territory were required, a large fleet would have to be created to match that of Great Britain and perhaps gain control of the Atlantic and North Sea.