The Battle of Britain. The Greatest Air Battle of World War II 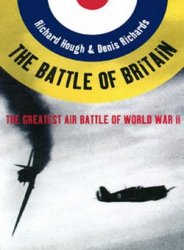 
The victory of the Battle of Britain ranks with Marathon and the Marne as a decisive point in history. At the end of June 1940, having overrun much of Western Europe, the Nazi war leaders knew that they had to defeat the Royal Air Force Fighter Command before they could invade the British mainland. With a finely-struck balance of historical background and dramatic renderings of RAF and Luftwaffe engagements over the English countryside, Hough and Richards offer a history that is at once deep and wide-ranging. They offer insight into how the British laid the groundwork for victory through aircraft research and production, the development and implementation of command and control structures, and research into new technologies, the most important of which was radar. Hough and Richards also utilize first-person accounts of the battle whenever possible, rendering the battle scenes with cinematic intensity. A compelling introduction to one of the most important battles of World War II, The Battle of Britain pays tribute to the men about whom Winston Churchill would remark, "Never in the field of human conflict was so much owed by so many to so few." 100 illustrations, 7 maps