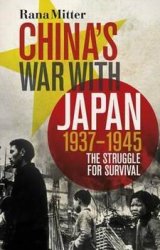 The second major war between China and Japan (1937-1945) started before and ended after the Second World War in Europe. Neglected by the world leaders at the time and by historians thereafter, the fate of the protagonists in this war was inexorably shaped by it and yet, few, looking at China and Japan today, realise how the events and consequences of that war bear on the imprint of the two Asian giants in the 21st century. This book is an account of that war. The author, Mitter, wrote it mainly as a study of one of the two most important Chinese in the twentieth century - Generalissimo Chiang Kai-shek (known sometimes as `G-Mo', or more derisively, by his arch `frenemy', General Joseph Stilwell, as `Peanut') and Mao Zedong.