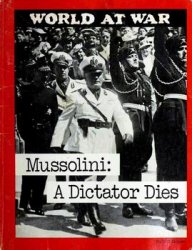 Benito Amilcare Andrea Mussolini (29 July 1883 – 28 April 1945) was an Italian politician, journalist, and leader of the National Fascist Party, ruling the country as Prime Minister from 1922 until his ousting in 1943. He ruled constitutionally until 1925, when he dropped all pretense of democracy and set up a legal dictatorship. Known as Il Duce ("the leader"), Mussolini was one of the key figures in the creation of fascism.