Dissecting the Holocaust: The Growing Critique of ‘Truth’ and ‘Memory’ 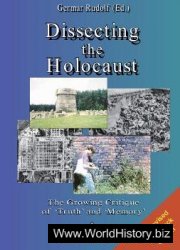 2nd, revised edition. Dissecting the Holocaust applies state-of-the-art scientific technique and classic methods of detection to investigate the alleged murder of millions of Jews by Germans during World War II. In 22 contributions of each ca. 30 pages, the 17 authors dissect generally accepted paradigms of the ‘Holocaust’. It reads as exciting as a crime novel. This is the intellectual adventure of the 21st century…