Blitzkrieg: From the Rise of Hitler to the Fall of Dunkirk 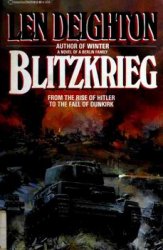 The devastating "lightning war;' a new form of warfare unleashed by the Nazis in the opening months of World War II. ..welding armor, aircraft, and infantry into one swift and merciless military machine. Here are the Germans, rising under Hitler from national humiliation to a steel-willed mission of world conquest and the French, overwhelmed by the bold German sweep through the Ardennes Forest that ultimately led to the fatal encirclement of themselves and their British allies at Dunkirk.