The Last Battle: The Classic History of the Battle for Berlin 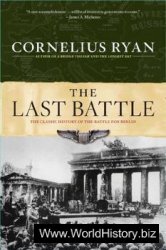 The Battle for Berlin was the culminating struggle of World War II in the European theater, the last offensive against Hitler's Third Reich, which devastated one of Europe's historic capitals and marked the final defeat of Nazi Germany. It was also one of the war's bloodiest and most pivotal battles, whose outcome would shape international politics for decades to come.