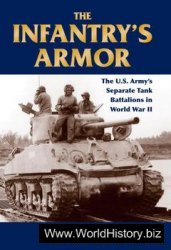 The U.S. Army's separate armored battalions fought in obscurity by comparison with the flashy armored divisions, but they carried the heavier burden in the grim struggle against the Axis in World War II. The battalions participated in every armored amphibious assault that the army conducted. They did most of the bloody work in Italy, made vital contributions in France, and constituted the entire effort in the Pacific.