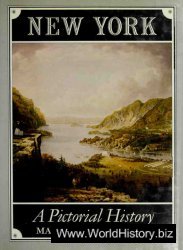 New York : a pictorial history
New York : Scribner
Author:Davidson, Marshall B
1977
Language:English
Format: pdf
Size:89,3 Mb
In the first comprehensive pictorial history of New York ever to be published, Marshall B. Davidson combines immense learning and a vivid writing style to show the richly varied history of the Empire State from Indian times to the present. He has chosen 750 historical pictures, some never published before, to document the story of the state that is home to almost one in every ten Americans. The illustrations show life upstate and life in the world's greatest city. They depict the development of New York's farms and factories, the building of the Erie Canal, and the phenomenal growth of the port of New York; they show the warriors—Indian, English, French, and
American—who have battled over its land and waterways, and notable figures in the state's history, from Peter Stuyvesant to Fiorello LaGuardia. Above all, they convey the wonderfully varied mixture of population that makes New York a microcosm of the nation as a whole.