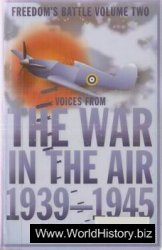 The second volume of the classic Freedom’s Battle trilogy provides intensely vivid accounts of the war in the air.
From the brilliant summer nonchalance of 1940 to the grim, anonymous exhaustion of the bomber crews delivering the infernos of Hamburg and Dresden, all the great dramas of the air war are here, described by the men of the British and Commonwealth Air Forces who did the fighting. We accompany them in the desperate days of the fall of France; during the Battle of Britain; throughout the agony of Bomber Command; over the high seas; to Malta; the desert battles; and in the struggle with Japan.