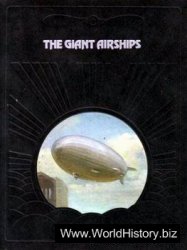 This excellent volume on the history of the rigid airship is part of the Time-Life "The Epic of Flight" series. It has a simulated embossed leatherette cover in dark blue with a full color printed insert of the Hindenburg. It is profusely illustrated with many full color and crisp black-and-white photographs and drawings. The first chapter deals primarily with Count Ferdinand von Zeppelin's development of the first practical, navigable, rigid airship in 1900. Also included is a history of experimentation and speculation prior to this date. Early non-German efforts such as the Lebaudy, Nulli Secundus, and America are depicted and discussed. The efforts of Santos-Dumont are examined. The pre-war accomplishments of the German Airship Transport Company (DELAG) are detailed.