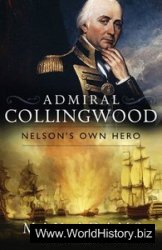 Max Adams is a TV writer & presenter who has travelled the world to research the story of Admiral Collingwood, Nelson's great friend -- and at one point, rival in love. From the day he went to sea as a 13-year-old boy to his death (at sea) aged 62, Collingwood kept a diary. His diaries, letters and recently discovered log books enable us to hear his story in his own words -- and he was a wonderful writer, descriptive, comic and full of insight. Collingwood fought in almost every major sea battle of the era and rose from humble midshipman to Admiral. He became Britain's 'minister at sea' for five years, effectively running the Mediterranean war effort. His grasp of military, economic and diplomatic affairs was remarkable given his complete lack of conventional education. His service began with the American War of Independence and ended when victory over Napoleon's navy was assured. He wrote the victory despatch the night after Trafalgar. The story of his life is that story of the navy throughout the glory years of the Age of Sail -- the world of fictional admirals Jack Aubrey, Horatio Hornblower and Richard Bolitho.