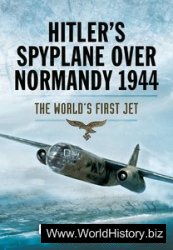 This is the story of the Arado 234, an aircraft that on one day in 1944, in the skies above Normandy, heralded the beginning of a new era in aviation: the jet era...
These images, previously unseen by the public, shed new light on the battle, whilst at the same time proving the Germans' indisputable superiority in the field of jet aviation. The fact that American troops hastened to transfer the Arado AR234 and Messerschmitt 262 to the USA to uncover all their secrets postwar says a lot about how they were viewed in the eyes of the enemy. In addition to many top-secret aerial images, this book is enriched with around twenty photographs from the personal archives of Erich Sommer, the Arado pilot, which have never before been published. The book is packed with both color and black and white images and represents an impressive pictorial history of the world's first jet.