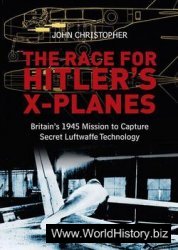 During World War II, Hitler's engineers had pioneered an incredible array of futuristic secret weapons, from the Me 262, the first operational jet fighter, to the deadly V2 intercontinental ballistic missile. With the Third Reich shattered and lying in ruins, in the summer of 1945, the Allies launched a frantic race to grab what they saw as the justifiable spoils of war. The Americans and Russians in particular were anxious to secure not only the aircraft and the research and production facilities, but also the key German scientists and engineers. This Nazi technology would define the balance of power in the phony peace of the Cold War era, launching an arms race that shaped the modern world for decades to come. Using previously unpublished secret Air Ministry reports, and offering comprehensive photographs of the aircraft, research, and manufacturing facilities, this book tells the untold story of the British mission to Germany.