Battle on the Aisne 1914: The BEF and the Birth of the Western Front 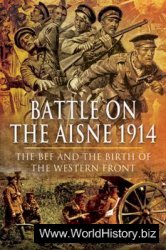 The river Aisne featured prominently in August 1914 during the Retreat from Mons and in September was the scene of bitter fighting when the BEF re-crossed it in their unsuccessful attempt to dislodge the German Army entrenched along the Northern Crest.The fighting was hugely costly to the BEF, which had already fought three major engagements and marched over 200 miles in a month. The three British Corps lost over 700 officers and some 15,000 men. Little wonder one officer wrote that he felt he was 'in the company of ghosts'.Historian Jerry Murland places the Aisne battles in their context, both from the BEF and German viewpoints.