A Storm in Flanders: The Ypres Salient, 1914-1918: Tragedy and Triumph on the Western Front 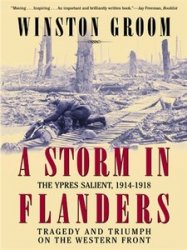 Author: Winston Groom
A Storm in Flanders: The Ypres Salient, 1914-1918: Tragedy and Triumph on the Western Front
Grove Press
ISBN: 0871138425
2002
Format: EPUB
Size: 5,3 МБ
Language: English
Pages: 272
Forrest Gump and Shrouds of Glory established best-selling author Winston Groom as an electrifying writer and narrative historian. Now, in A Storm in Flanders, the Pulitzer Prize nominee visits the bloody four-year-long Battle of Ypres, a pivotal engagement that would forever change the way the world fought -- and thought about -- war. Groom describes how the quaint medieval Belgian town of Flanders -- following the dreams and schemes of the stubborn "butchers and blunderers" who commanded from afar -- became the most dreaded place on earth, a "gigantic corpse factory" where hundreds of thousands of men died for gains that were measured in yards. In 1914, Germany launched an invasion of France through neutral Belgium -- and brought the wrath of the world upon herself. In accessible prose, Groom presents Ypres as the centerpiece of World War I, with all of its horrors, heroism, and terrifying new tactics and technologies. Ypres is where some of history's most hideous weapons were unleashed and refined: poison gas, tanks, mines, air strikes, and the unspeakable misery of trench warfare.