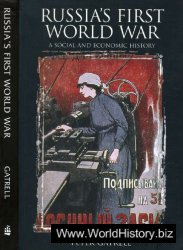 The story of Russia¿s First World War remains largely unknown, neglected by historians who have been more interested in the grand drama that unfolded in 1917. In Russia¿s First World War: A Social and Economic History Peter Gatrell shows that war is itself revolutionary rupturing established social and economic ties, but also creating new social and economic relationships, affiliations, practices and opportunities. Russia’s First World War brings together the findings of Russian and non-Russian historians, and draws upon fresh research. It turns the spotlight on what Churchill called the unknown war, providing an authoritative account that finally does justice to the impact of war on Russias home front